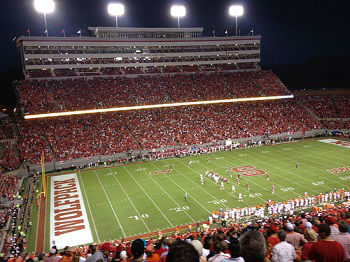 Preview: NC State showed significant signs of improvement last season as the Wolfpack went 8-5 overall with a 34-27 bowl win coming against UCF. NC State had some growing pains through last October, but the team finished strong going 4-1 in their last 5 games heading into the offseason. NC State returns 14 starters, including 9 to an offense that should put big numbers in 2015. Dave Doeren’s team is headed in the right direction and this squad has the ability to take another step forward this season.

Florida transfer QB Jacoby Brissett was solid in his first year as the starter and the former highly touted recruit took good care of the ball while leading the Wolfpack to their resurgence. Brissett is back and he’s expected to build off of what was a solid 2014 campaign. An area of concern on offense is the O-line which needs to replace both starting tackles. The running game has an embarrassment of riches with returning players Thornton and Dayes being challenge by three highly regarded recruits. The receiving corps returns 4 starters and should continue to improve.

The NC State defense turned around last year when the unit went from a more conservative approach to more blitzes towards the end of last season. The defensive line is more in a reload situation than rebuild with 3 starters moving on. The front has guys like Gibbs, Nelson, and Rose who saw time last season and are ready to step up and fill the gaps. The LB position should continue to build off of the progress they made last season with Moore and Fernandez back in the mix. The secondary is loaded with experience as 3 starters return and this unit will build around talented players Tocho and Jones.

Prediction: NC State saw significant improvement last season and a lot of that can be attributed to the addition of QB Jacoby Brissett. The Pack should continue to get better on the offensive side of the ball and if the defense can build on the success they had towards the end of last season then this could be a team to watch out for in the ACC. NC State isn’t favored to win the ACC Atlantic division, but don’t count this team out as they try to jump Clemson and Florida State in 2015.