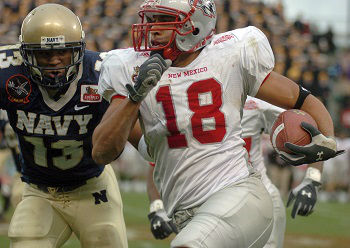 Preview: New Mexico showed slight improvement in 2014 as they went from 3 wins in 2013 to 4 this past season. The Lobos are hoping that a more manageable nonconference slate will help propel them to bowl eligibility in 2015. It’ been a gradual rebuild under head coach Bob Davie who led the Lobos to an 11-26 record over his first 3 seasons as head man. The key to success for New Mexico is making progress on the defensive side of the ball while continuing to pile on the rush yards on offense.

Last season the Lobos were 5th in the nation in rushing average and New Mexico will look to translate their rushing success into more victories this coming season. New Mexico has some decisions to make at the QB position as they could continue to ride with Lamar Jordan who’s a solid rusher with below average passing skills, or do a 180 and play JUCO transfer Austin Apodaca who’s more of a pure passer. The QB position might be by committee if one guy doesn’t separate himself. The O-line should be decent with 3 returning starters and 4 guys coming back that have starting experience. The RB position will also be solid with returning 1,000 yards rusher Jhurell Pressley in the fold. New Mexico has an unproven group of receivers that’s hoping to get more action in 2015.

The Lobos have had their issues in pass defense in recent years and as a result the team has decided to change things up and go with a 3-3-5 scheme to get more help in the backend of the unit. The D-line brings back experience and will build around guys like Juarez, Udeh, and D’Avanzo. The LB position looks to be the strength of the defense as former top tackler Dakota Cox looks to regain form coming off an injury. Cox will be joined by Carson and White to form a solid trio. New Mexico will add a 5th defensive back and that position will look to be filled by Bennett or Crosby who both have the ability to help in run support. The secondary has struggled but the unit returns guys like Jones, Boatwright, Brown, and Byrd.

Prediction: The schedule eases up for the Lobos this season with 3 very winnable games coming in the nonconference. There are still question marks at the QB position, but the Lobos have two guys competing for the spot that they have confidence in. If the team can adjust and find more success in the new defensive scheme then the Lobos have a chance to get to bowl eligibility this season.