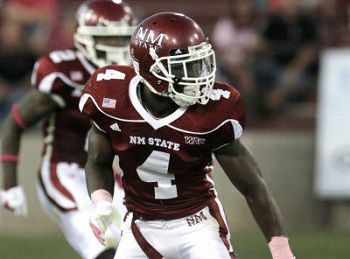 Preview: It’s been tough for head coach Doug Martin to get this New Mexico State football program off the ground as the team is just 4-20 overall in his first 2 seasons as the head man. The team is optimistic that they can improve in 2015 with 17 returning starters back in the mix, but the team is coming off a 10 game losing streak to close out last season. If everything goes right for the Aggies in 2015 I still have a hard time seeing this squad get to bowl eligibility. A goal for this team should be to not finish last in the Sun Belt and work up from there.

New Mexico State brought in an up-tempo offensive attack in 2014 under OC Gregg Brandon and even though the unit didn’t have consistent results, the scheme gave this group an identity and something to build around going forward. Brandon is gone, but the unit returns 8 starters and is expected to progress in their second season under the system. The Aggies need to first find an answer at QB. The position returns 2014 starter Tyler Rogers, but he’s getting pushed by Jeanty and Allen. Whoever ends up winning the job will pay behind a solid O-line that returns top talent like Clement and Folasa-Lutui. The RB position is set with 1,000 yard rusher Larry Rose back. The top option at receiver will be Teldrick Morgan who had a great 2014 campaign.

The formula to beat New Mexico State was fairly straight forward last season by opposing offenses. Run the ball on every down was commonplace because the Aggies couldn’t stop anyone with their young and undersized defensive front. There remain size issues on the defensive front, but the coaching staff is hoping that a year of seasoning will help their players grow and be able to handle more battles in the trenches. This New Mexico State unit at least returns nearly every starter and there’s reason to be hopeful with the LBs amd secondary. The LB corps will be led by Rodney Butler who was one of the top performers on defense in 2014. The secondary will look to build around safety Kawe Johnson who’s an aggressive playmaker. The defense is hoping to minimize their size issues by bring more blitzes and unpredictability.

Prediction: The offense showed signs of progress last season, but if the defense continues to be an open gate against the run then this squad will continue to struggle in conference play. New Mexico State will get tested right out of the gate with an opening road game against Florida. The key for the team here will be to limit injuries prior to more winnable nonconference games against UTEP and New Mexico. If the Aggies can pick up one more win than they did in 2014 that has to be considered a success for this undersized team.