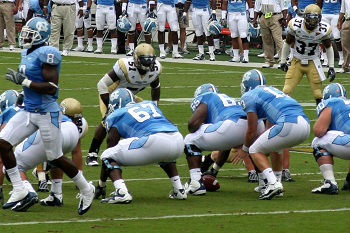 Preview: The Tar Heels fell short of their expectations last season, but the team was still able to make a bowl game. After losing to Rutgers in the Quick Lane Bowl, UNC finished the 2014 campaign 6-7 overall and the Heels went 4-4 in conference play. Over his three season at North Carolina head coach Larry Fedora is 21-17 overall. This could be a make or break year for Fedora as the team heads into 2015 with a lot of returning talent and elevated expectations.

The offense is ready to put up big numbers this season with 10 returning starters, including QB Marquise Williams who set school records for total offense in 2014. Williams is a threat both through the air and on the ground, but to keep their star QB healthy look for RBs Logan, Hood, and Morris to take on more of the burden. The O-line returns all 5 starters to a unit that continues to develop. The O-line will be headlined by Turner at guard and Spain at LT. The receiving corps also returns a bevy of talent with the unit being led by imposing receivers Davis, Howard, and Hollins.

North Carolina will look to turn things around on the defensive side of the ball as they bring in former Auburn head coach Gene Chizik to be the DC. Last season the Tar Heels finished in the basement of the ACC in many defensive categories, but at least the unit has nowhere to go but up. UNC will implement an easier to understand 4-3 scheme after the team deployed a 4-2-5 over the past 3 seasons. The defensive line will look to build around underclassmen like Jones, Drennon, Dalton, and Clarke. The D-line will need to get a lot of support from the LB corps to help them with their development. The line backing unit will be led by senior Schoettmer. The secondary is loaded with depth, but the unit as a whole has a lot of room for improvement.

Prediction: North Carolina has the potential to be a surprise team in the ACC this season, but it seems like we say this about the Tar Heels every year. Perhaps things will be different in 2015 and the success of this team is dependent on the defense improving and QB Williams staying healthy as he continues put himself at risk in the run game. UNC has a fairly manageable nonconference slate with their toughest test coming in week one against South Carolina. The Tar Heels will almost certainly make a bowl game with competing for the Coastal title being their ultimate goal.