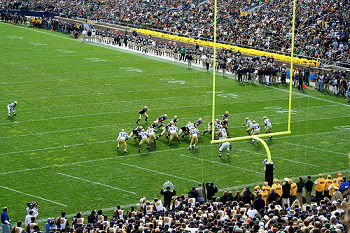 Preview: It was a tale of two seasons for Notre Dame in 2014 as the team opened the season 6-0 while finishing out the regular season going 1-5 in their last 6 games. The Irish were able to go into the offseason on a positive note as Notre Dame went on to beat LSU in their bowl game by a final of 31-28. Notre Dame returns 19 starters to a team that now has considered depth and experience throughout the roster. The Irish have seen quite a bit of success under head coach Brain Kelly who’s 45-20 in his 5 seasons as the head man.

The offense showed progress last season and with 9 returning starters this unit should only get better in 2015. With streaky QB Everett Golson transferring the starter job now falls to Malik Zaire who’s got a lot of promise. The O-line returns 4 starters to a unit that should be a considerable strength this season. The Irish are loaded with quality options at the receiving positions with guys like Fuller, Robinson, Brown, and Carlisle to build around. The ground game will also be strong with returning starter Tarean Folston back in the mix and the team is hoping to get more out of former top recruit Greg Bryant.

The Notre Dame defense was tough to figure out in 2014 given their streaky play, but a unit that returns 10 starters is hoping to get more consistent high level production in 2015. The defensive line returns all 4 starters and the unit will build around guys like Day, Rochell, Jones, and Okwara. The LB position is a significant strength with all 3 starters back including defensive leaders Jaylon Smith and Joe Schmidt. In the secondary the CB position is in great shape with Russell and Luke starting, but the safety position is more of a question with returning starters who’ve struggled in Shumate and Redfield.

Prediction: This is the deepest team that Kelly has had during his tenure with Notre Dame and the team is expected to do great things as a result. The only thing that could hold back the Irish in 2015 is having QB Malik Zaire not live up to his potential, or having their tough schedule wear the team down. Anything short of a January bowl or even a berth to the playoff would be a downer for a team that’s loaded with potential.