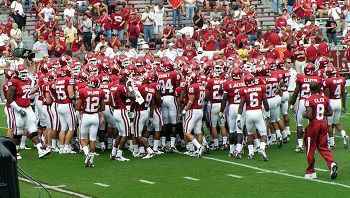 Preview: Oklahoma fell way short of their lofty goals in 2014 as many had this team pegged as national title contenders, but in the end the Sooners finished the year 8-5 overall. Oklahoma really fell off in the second half of the season and going 4-5 overall in their last 9 games including an embarrassing 6-40 bowl loss against Clemson. Expectations remain high in Norman, but it’ll be tough for the Sooners to jump teams like TCU and Baylor in the standings. Coach Bob Stoops has had an incredible career at Oklahoma as he’s an amazing 168-44 in his 16 seasons as the head coach.

There’s excitement surrounding the offense as the unit brings in OC Lincoln Riley who’s coming off major success at East Carolina. Oklahoma will employ a spread attack that’s focused on throwing the ball, but there’s still questions around who’ll be the starting QB. The QB competition is between 4 guys, but the early leader might be Texas Tech transfer Baker Mayfield who has experience in this type of offense. The offensive line returns just 2 starters and the unit will build around veterans Darlington and Kasitati. Even though the offense will heavily feature the pass, don’t forget about the rushing attack that features talented backs like Perine, Ross, and Mixon. Oklahoma will employ 4 WRs in their spread attack and the unit will be led by Sterling Shepard.

The defense had their troubles stopping some of the tougher teams Oklahoma faces in 2014 and that’ll be tough to change in 2015. The Sooners have 6 starters back, but some of the offenses in the Big 12 are so potent you’d have to be a top 5 defense in the nation to slow down some of the attacks. Oklahoma returns just 1 starter on the D-line and the loss of tackle Phillips to the NFL hurts. The unit will look to build around Tapper, Dimon, and Walker. LB will lead the defense with 3 returning starters back to the unit. Oklahoma will lean the presence of backers like Triker, Evans, and Alexander. The secondary has high end talent with guys like Sanchez and Parker leading the way, but the unit lacks quality depth behind their two rising stars.

Prediction: There’s a lot of uncertainty surrounding Oklahoma coming into 2015, but there’s also excitement about the possibility of this team taking a positive step forward after having an underwhelming 2014. The schedule is brutally tough for the Sooners which will make it difficult for this team to improve on their 8 win mark from a season ago. If Oklahoma can figure out their QB situation early on lookout for this offensive unit.