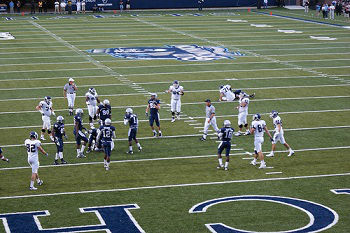 Preview: The Monarchs had a more than respectable transition into the FBS and it really goes to show that there’s not much separating the lower FBS conferences with the FCS level of football. Last season Old Dominion went 6-6 overall in 2014 and the Monarchs closed the regular season on a three game winning streak which including a surprise win over Louisiana Tech. Head coach Bobby Wilder has done a great job at ODU earning a very nice 52-20 record in his 6 seasons as the head man.

The offense was the strength of the team in 2014, but the loss of QB Taylor Heinicke hurts. The Monarchs are still happy to have 8 players back starting on this side of the ball, but the loss of Heinicke means uncertainty on this unit. The starting job will be a battle between former backup Shuler Bentley and JUCO transfer Joey Verhaegh, with the edge going to Shuler who’s more familiar with the system. Whoever earns the starting QB job will work behind an experienced O-line that returns 10 players with game appearances. The pass game will also be aided by WR ready to step up like Vaughn, Washington, and Pascal. Look for the run game to get more action in 2015 behind Ray Lawry who was one of the top freshman backs in the nation a year ago.

Old Dominion had its moments of success on defense in 2014, but those were few and far between as the unit was gashed by some of the better teams ODU faced. The Monarchs were young on the defensive side of the ball, but that means a lot of guys return in 2015 and the unit is expected to continue to improve. The D-line returns 3 starters and this part of the defense will build around veteran Poncho Barnwell. The LB position returns Ricks and Simpson who were two of the top defensive performers in 2014. The secondary needs to get better at limiting the big plays and the unit is expected to get a boost from UAB transfer Devon Brown.

Prediction: Old Dominion wasn’t eligible for a bowl game last season, but they could have earned an invite with their 6 wins. It’ll be tough for this squad to repeat that type of success given the loss of 4 year starter QB Taylor Heinicke. The coaching staff is realistic, but hopeful that this developing team can reach a similar level of success in 2015. ODU has winnable games throughout their schedule, but they need an option to emerge at QB early on if they’re going to get bowl eligible.