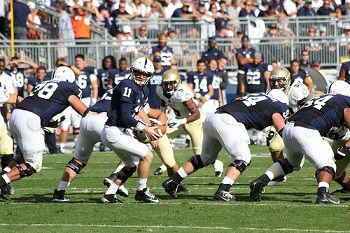 Preview: Penn State didn’t quite have the success they were hoping for in their first season under head coach James Franklin. The Nittany Lions opened the 2014 season 4-0, but terrible offensive play plagued this team throughout the year as they finished the regular season 6-6 overall. Penn State was invited to postseason play where they picked up a nice 31-30 bowl win over Boston College. With 15 returning starters, including 9 on offense, Penn State is hoping they can make some big strides forward this season under James Franklin.

The first order of business on offense is for the team to get more consistent protection for their junior QB Christian Hackenberg. Their former top recruit took a significant step back in 2014 throwing more INTs than TDs and getting sacked more than anyone else in the Big Ten. Hackenberg has the talent to be a top guy in the conference, but he needs to play with more poise in the pocket in 2015. The O-line should be better with 4 starters back and 6 guys back who have starting experience. Last season the WR position was a work in progress as the unit brought in some young guys and now this group is looking to take a step forward with guys like Godwin, Blacknall, and Hamilton looking to improve. The RB position is in good hands with returning starter Akeel Lynch back in the fold.

If it wasn’t for the defense, Penn State wouldn’t have even made it to bowl eligibility last season. The Nittany Lions had one of the best defenses in the Big Ten in 2014 and that was playing behind an offense that didn’t do the unit many favors. The D-line returns 2 starters, but should still be in great shape as the unit builds around the likes of Anthony Zettel and Austin Johnson. The ends need to be replaced and the team will look to Nassib and Sickels to fill the void. Penn State also returns 2 starters in the LB corps, but the loss of Mike Hull hurts after he led the Big Ten in tackles in 2014. The secondary should continue to be a strength as this unit returns 2 starters with others ready to take over larger roles.

Prediction: Penn State played in a number of close games in 2014 because of their defense. If the offense can make progress behind what should be a better O-line then there’s no reason to think this squad can’t improve on their win total in 2015. Christian Hackenberg has the talent to lead the program to great things, but he needs his young O-line to continue to develop and make the right plays in front of him. With a manageable non-conference slate expect Penn State to at the very least get back to a bowl game in 2015.