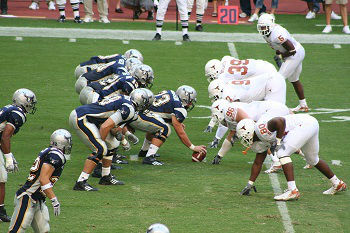 Preview: The Rice Owls have had one of the most successful stretches in the program’s history over the past few seasons, but that’ll be tough to maintain with only 10 starters returning in 2015. The Owls had one of the most veteran teams in the nation last season and as a result Rice went 8-5 overall with a 30-6 bowl win coming against Fresno State. The Owls got off to a tough 0-3 start in 2014, but their veteran group didn’t give up as they went on to have another respectable campaign.

The team is set at the QB position with senior dual threat Driphus Jackson back and ready to build off of a successful 2014 season. Jackson had shoulder surgery in the offseason, but he’s expected to be back and ready to perform to start 2015. The O-line will be a work in progress with only 2 starters back including question marks coming at the LT position. The RB position remains a strength with Jowan Davis and Darik Dillard who form one of the best tandems in CUSA. The loss of Jordan Taylor hurts the receiving corps, but the unit isn’t lacking for potential players to fill the void.

The defense as a whole is in rebuild mode with only 4 starters returning. The defensive line was supposed to be one of the best in the conference in 2015, but unexpected losses of elite talent have this unit reeling with now just 2 returning starter. The LB corps returns just 1 starter, but it’s their top returning tackler Alex Lyons. The secondary has shown improvement in recent years, but with just 1 returning starter this unit is in rebuild mode. This inexperienced unit will look to build around corner Pollard.

Prediction: Head coach David Bailiff has done a tremendous job of returning respectability to the Rice football program, but he has his work cut out for him in 2015 with just 10 returning starters. The defense will almost certainly take a step back in their production, but the offense can continue to progress with the return of senior leading QB Jackson. With brutal nonconference games Texas and Baylor on the road it could be tough for this squad to continue to see the same level of success they’ve had over the past three seasons.