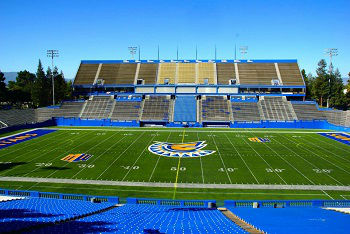 Preview: San Jose State has taken a significant step back over the past two seasons after their head coach went on to take the same roll at Colorado after the 2012 campaign that saw the Spartans go 11-2. Over the past two years replacement head coach Ron Caragher has led the Spartans to a 9-15 mark and SJSU is hoping they can continue to build around what looks to be a young group that has potential. Last year the Spartans closed the season on a 6 game losing streak to finish the year 3-9 overall and SJSU will look to get the bad taste out of their mouth right out of the gate in 2015 going against New Hampshire.

The Spartans’ offense fell off of the map towards the end of 2014 and a lot of that had to do with unrest at the QB position. QB Joe Gray finished last season as the starter and he looks to have the inside track on earning the job in 2015, but he’ll have competition from JUCO transfers Potter and Watson. Gray did throw for a respectable 2,300 yards in 2014, but he has to get better at limiting turnovers and completing drives. Gray will play behind a younger O-line that has experience returning 4 starters. SJSU has a bevy of returning starters at the skill positions, but with excellent recruiting look for some of the young guys to take on a larger role as the season goes on.

The defensive struggles last season were a direct result of the Spartans being unable to stop opponents on the ground. The pass defense ranked well, but opposing teams weren’t forced to throw given the Spartans’ deficiencies along the front. The D-line has some turnover, but this isn’t necessarily a bad thing with new faces ready to take on the challenge of fixing the front. One strength of the defense comes from the LB corps which has two returning starters in addition to adding Hawaii transfer Leaf and impact freshman Ginda. The secondary is where the Spartans will butter their bread again in 2015 with this unit being loaded with talent like McKnight, Connette, Pruitt, and Wallace.

Prediction: This looks like it could be a rebuilding year as the Spartans look to build around a strong foundation of young players. San Jose State brought in an excellent recruiting class and look for many of the freshman to make an impact right away. There are still questions around the defensive front and QB position will likely hold this squad back, but the future looks bright for this program. A bowl berth would be a surprise, but a possibility if the QB situation works itself out in a positive manner.