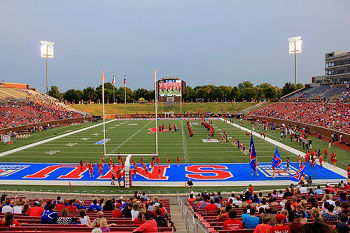 Preview: It became clear that changes needed to be made after the Mustangs went just 1-11 during the 2014 campaign. SMU opened the season losing their first 11 games in a row prior to winning their finale on the road against UConn by a final of 27-20. It became clear early on that SMU would struggle in 2014 after losing each of their first 4 games by 37+ points per contest. After week 4 SMU had the worst total team offense and defense in the nation. In the offseason SMU brought in Clemson OC Chad Morris to start the rebuilding process. SMU looks to make changes on both sides of the ball and the Mustangs return 15 starters.

The offense started to have more success towards the end of 2014 once QB Matt Davis took over the job. Davis is back and the dual threat QB will look to have more success in the new no-huddle scheme he’ll play in under Morris. The offense will feature a run game that goes between the tackles more often and the backfield is set with options like Gresham, Line, and Durall. The offensive line returns all 5 starters to a unit that should continue to improve given the addition experience and continuity. SMU will also bring back the TE position after not using it under former head coach June Jones. The receiving corps will look to get more consistent production from a unit that’s led by senior Darius Joseph.

The Mustangs bring in new DC Van Malone who was working for Oklahoma State before coming over to take the job. Under their new DC the defense will change things up and go into a 4-2-5 scheme. Malone will look to bring a more opportunistic approach to a defense that struggled forcing turnovers in 2014. Both the D-line and LB corps each return 2 starters to a front that will look to bring speed on the end to force disruption in the backfield. The secondary has 3 starters back including Shakiel Randolph who has the body to play in the NFL and he’ll try to spearhead the new Star hybrid position.

Prediction: SMU was probably better than their record would indicate last season, but after making a change at head coach mid-season the Mustangs pretty much threw in the towel. There is excitement back around the program after the popular hire of Morris. The rebuild might take some time, but bringing in Morris was almost a best case scenario for the Mustangs, especially coming off a 1-11 season. The schedule remains tough and the key for this squad will be to mentally overcome almost surefire blowout losses early in the season to Baylor and TCU. Look for SMU to make their first steps back in the right direction in 2015.