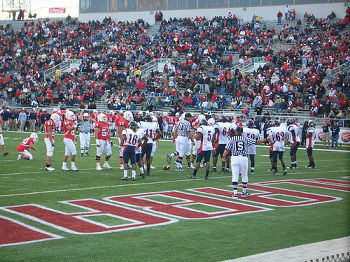 Preview: South Alabama really tested themselves out of conference last season and as a result their 6-6 record at the end of the regular season was more impressive than most “mid-major” schools. With reaching 6 wins the Jaguars were invited to a bowl game which was a great accomplishment for a program that’s still relatively new to the FBS. In their bowl game the Jaguars came up just short as they fell to Bowling Green by a final of 28-33. South Alabama is in an interesting spot right now as they return the least amount of starters in the FBS, but they also received an influx of players from the defunct UAB program.

The offense returns just 3 starters, but South Alabama snatched up some UAB players to add to the mix along with bringing UAB OC Bryant Vincent on board. The Jaguars add QB Cody Clements from UAB and he should be the starter right away for USA. The O-line returns just 2 starters, but the addition of UAB guard Cameron Blankenship adds an impact player to the unit. The RB position will be a strength with returning 1-2 punch Timmons and Johsnon ready to produce along with the addition of JUCO All-American Thomas. The WR corps is in rebuild mode with no returning starters and the Jags are looking to plug UAB transfer D.J. Vinson in right away.

The defense returns even fewer starters than the offense as this unit brings back just 2 returning starters. This unit is clearly in rebuild mode, especially when considering that a number of the players that moved on received some sort of conference honors last year. The defensive line returns 0 starters and this portion of the defense is hoping former backups like Gipson, Alford, and Butler can step up into larger roles right away. The LB corps returns 1 starter and the unit will add some talent in the form of transfers Dees and Jackson. The secondary could be the strength of the defense with returning talent mixed with some freshman and JUCO transfers filling in the gaps.

Prediction: This is one of the more difficult teams to project given the Jags return just 5 starters along with the influx of UAB players that will come on board and make an immediate impact. With the influx of transfers this won’t be a complete rebuild, but still a work in progress as all of the new faces get acclimated. Luckily USA runs a very similar system to UAB and bringing over the Blazers’ OC will help the transition even more. A bowl game is likely out of reach, but this team could surprise if the new pieces can fill in the gaps.