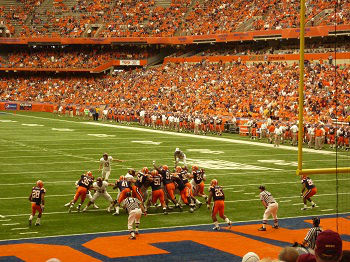 Preview: Syracuse took a big step back last season going just 3-9 overall, including just 1 win in their last 10 games. Offense was clearly the issue for the Orange in 2014, but now the defense also has question marks with only 3 returning starters back. Head coach Scott Shafer doesn’t have the program going in the right direction and the odds aren’t in Syracuse’s favor to get out of the ACC Atlantic division in 2015. The fans are already getting restless and it’ll be interesting to see how long of a leash Shaffer gets if the program continues to tank.

Even though the offense was downright awful for most of 2014, this unit hopes to see steady improvement with 8 returning starters back to a unit that should look more cohesive. Veteran dual threat QB Terrel Hunt went out with an injury last season, but he’s back and ready to lead this squad to more success. The O-line loses their veteran LT Sean Hickey, but the unit should remain solid with 4 returning starters. The part of the offense that has the most attrition comes at the RB position. Look for guys like McFarlane, Philips, and Morris to take most of the carries. The WR corps is a patchwork job with guys like Ishmael and Cornelius leading the way.

The defense is in rebuild mode with just 3 returning starters from a unit that was respectable in 2014 given how bad the offense was. The D-line returns 1 starter and the unit will look to build around the promising end Ron Thompson long with Luke Arciniega. The LB corps will likely be a shell of its forms self with talents like Lynch and Davis moving on. The unit will now rely on underclassman Franklin to lead the position. In the secondary little experience returns at safety while CB should be steady with Whigham and Morgan in the fold.

Prediction: The bright news is things can’t get much worse for a team that posted just 3 wins a season ago and perhaps if Hunt can stay healthy this squad will be more competitive this coming year. Shafer is already on the hot seat given the failures of 2014 and he’s facing a tough uphill battle this year going against a tough schedule. If this team can even get 1 more win than last season that would have to be considered a success with this roster.