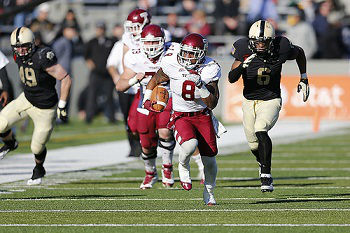 Preview: The Temple Owls took a big step in the right direction last season as the team went 6-6 overall with their best wins coming in a blowout on the road against Vanderbilt and a home win over ranked ECU. The Owls didn’t get invited to a bowl game in 2014, but look for that to change this season as the Owls bring back 19 starters to a team that looks primed to make the next step forward. Head coach Matt Rhule has seen improvement in his squad each of the last two seasons and now he has a group that’s a serious contender for the AAC title.

The offense is in the capable hands of QB P.J. Walker who’s been up and down, but shown flashes of greatness in his two seasons as the starting QB. Walker took over halfway through 2013 as a true freshman and now the junior is ready to have a breakout season. Walker has had questionable protection along the O-line, but the unit returns 4 starters and adds some depth with what should be a better group in 2015. The run game was almost a nonfactor in 2014 with the lead rusher not even eclipsing 400 yards on the year. This group hopes to be better with guys like Williams, Hood, and even Walker looking to step up. Temple also has some intriguing prospects coming in who could earn carries early on. The WR corps was underwhelming last season and this unit is hoping to get help from Hawaii transfer Keith Kirkwood.

Temple turned things around in a big way on the defensive side of the ball in 2014 and with 11 returning starters this unit expects to be the best in the conference. The 2014 defense ranked in the top 5 in the nation in points allowed and they also over doubled their amount of forced turnovers in comparison to 2013. The heart and soul of the defense is Tyler Matakevich who’s the top returning tackler in the nation. The D-line will be strong with potential future NFL players Martin-Oguike and Loannidis leading the way. The secondary has taken big strides over the past couple seasons after being an undermanned unit not all that long ago.

Prediction: After going 6-6 last year and not going to a bowl game look for this veteran squad to return with a chip on their shoulder. The Owls should have their sights set on an AAC East division title given their returning depth and talent. We’ll get a great idea of where this squad stands early on with a home game coming against Penn State in week one. If Temple can manage their tough opening schedule and brutal nonconference slate this team could be one of the major surprises in 2015.