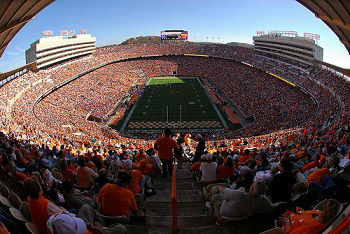 Preview: Tennessee has been on the rise since the hire of head coach Butch Jones as the team improved from 5 wins in 2013 to 7 wins in 2014, and bow with 18 returning starters this group is expected to make another step forward in 2015. Tennessee is aided by playing in the SEC East and even a run at the division title isn’t out of the question for this young team. The Vols were able to get a lot of their younger guys valuable playing experience in 2014 and that should pay dividends going forward. The Vols now have expectations and it’ll be interesting to see how this squad performs with the added pressure.

The offense was surprising led by QB Joshua Dobbs in 2014 after the QB went from being buried on the depth chart to leading the team to late season success. Keeping Dobbs healthy is important and that’ll be the job of the developing O-line which returns 4 starters. Tennessee was a sieve in pass protection in 2014, but with an added year of experience this group is expected to be more mature and ready to make a step forward in 2015. A serious position of strength for the Vols comes in the backfield with RBs Hurd and Kamara who are one of the best duos in the East. The WR corps is also set with talent as guys like Howard and North will be looked at to lead the unit.

Tennessee’s defense showed dominance against overmatched opponents in 2014 and this unit is expected to take another step forward and compete with the heavy hitters this season. The defense returns 8 starters including 3 along the line which has tremendous potential behind the likes of Barnett and Maggitt. The LB corps has to somehow replace run stuffer A.J. Johnson in the middle, while the outside looks to be solid led by Jalen Reeves-Maybin. The real strength of the defense comes in the secondary where the Vols return 3 starters. This unit is led by corners Sutton, Coleman, and Gauden, while the safety position is manned by hard hitter Randolph and McNeil.

Prediction: Many think Tennessee could rise up and win the SEC East and that’ll certainly be a possibility for this squad especially given their solid coaching. A lot of the Vols upside depends on whether or not Josh Dobbs takes the next step forward in his development. There’s certainly a lot of excitement around this program given how they closed last season mixed with the fact that the Vols return 18 starters. Expect big things out of this young team in the SEC East as they make a push for the division title.