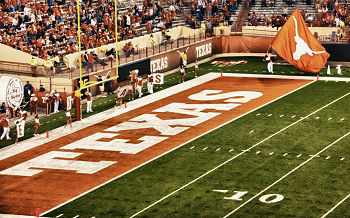 Preview: In their first season under new head coach Charlie Strong Texas did a lot of housecleaning with their roster and as a result the team sputtered going 6-7 overall. Texas opened week 2 with an embarrassing 7-41 home loss against BYU and they closed the year in similar fashion getting blown out by both TCU and Arkansas. Charlie Strong won’t get a long leash from the fan base and it’ll be interesting to see how patient the program will be as Strong tries to turn around one of the top 5 programs in the country.

Texas will transition to the up-tempo spread offense which suites their QBs in waiting with guys like Swoopes, Heard, and Locksley in the mix. It seems that Tyrone Swoopes still has the edge for the starting job, but Jalen Heard could be too promising a prospect to keep under wraps for another year. Whoever wins the starting job will work behind an O-line that returns all 5 starters to a unit that is expected to be better with more depth in 2015. The RB position looks to be a strength with a guy like Jonathan Gray leading this talented group. WR is a position in search of the playmakers, but with John Harris gone this unit is lacking an identity.

Texas returns just 5 starters to a defensive unit that was gashed more than their fair share of times last season. The defensive line is the strength of the team with talented depth lead by headliners Desmond Jackson and Hassan Ridgeway. LB is an area of concern with 2 leading tacklers moving on from the unit. Texas has some talented underclassmen waiting in the wings to prove themselves at the backer position if veterans Cole and Jinkens don’t step up. The secondary took a blow when Sheroid Evans got injured in spring ball. This unit could also look to underclassmen to fill the void.

Prediction: This is still a rebuilding project for Charlie Strong and the expected results of this team won’t be good enough for an impatient fan base. The question is how long will Strong get to be the head man at Texas if he doesn’t compete for Big 12 titles right away. Texas is changing things up this season on the offensive side of the ball and there’ll likely be a learning curve for this developing unit. With a tricky non-conference schedule mixed with a tough conference slate this team just needs to focus on bowl eligibility as their first plan of action and go from there.