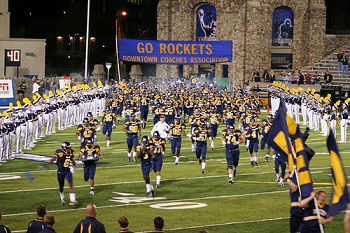 Preview: The Toledo Rockets are coming off yet another solid season going 9-4 overall with an impressive 63-44 bowl win coming against Arkansas State. The Toledo football program has quietly been a consistent force in the MAC going 26-13 overall in the three years under head coach Matt Campbell. Even with their success the Rockets are still a decade removed from their last MAC title and with 13 returning starters this group figures to be a factor in the conference again in 2015.

The offense will be an interesting case in 2015 given the immense amount of returning talent at the skilled positions mixed with an O-line that is in complete rebuilding mode. The offense was run by both QBs Phillip Ely and Logan Woodside with success in 2014 before injuries ended both guys’ seasons. The Alabama transfer Ely will be back from his injury sooner and he looks to have the edge in earning the starting job. The RB position will be in great hands with returning starter Kareem Hunt who was an all-conference selection a season ago. The receiving corps is also in good standing with Jones and Russell leading the way. The success of this unit could hinge on an O-line that will look to 5 new guys to start in 2015.

The defense should be a considerable strength for Toledo given the return of 8 starters to a unit that has talent and depth to go around. Up front the D-line is loaded as this unit will build around 4 returning starters, including all-conference tackles Hester and Jones. The line backing corps is a little less seasoned with only 1 returning starter back in the mix. This unit will look to forge a successful group around veteran Murdock. The secondary had been hit by the injury bug over the past couple years, but now this unit has a bevy of players with starting experience and there’ll be healthy competition throughout the unit.

Prediction: The Rockets were right on the doorstep of the MAC title game a season ago and this group looks to be in a similar place in 2015. The MAC West has a number solid teams that won’t be easy for Toledo to fight through given their inexperience along the O-line. The positive news is Toledo is aided by home games against Northern Illinois and Western Michigan who’ll be battling for the division crown. Tricky road games against UMass and Bowling Green could end up being road blocks for Toledo who ends the season running through 5 of the top teams in the conference.