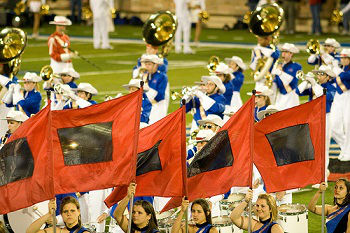 Preview: It wasn’t all that long ago when Tulsa was turning in double digit winning seasons, but things change quickly in the college football landscape and it can be tough to stay on top. This will be the first season for the team under new head coach Philip Montgomery who’s best known for his work with the Baylor offense. Montgomery had been an integral part of Baylor’s success and now the assistant gets his chance to run his own program.

The offense should put up big numbers in 2015 with 10 returning starters working to implement Montgomery’s proven system. There’s a lot of excitement surrounding the program with Montgomery on board especially on the offensive side of the ball. The QB battle will come down to veteran Dane Evans and freshman Chad president who was a Baylor commit. Evans actually put up a lot of yardage last season and with his experience he looks like the favorite to earn the job. Whoever wins the job will work behind a veteran line that returns 4 starters. The offense has its share of weapons at the skill positions. The run game will feature running back Zack Langer, while the receiving corps is led by Lucas and Garrett.

Tulsa ranked near the bottom of the conference in many defensive statistics last season and this unit will be coached up by new defensive coordinator Bill Young. The Golden Hurricanes have a lot of work to do as this squad gave up 28 or more points in every game they played in 2014. The defense at least has some pieces to build around with 7 returning starters. The D-line will build around talented veterans like Alexander and Luetjen. The line backing corps has 2 returning starters and will look to Garig Suits to take on a bigger leadership role. The secondary has 2 returning starters and will be led by tackling machine Michael Mudoh.

Prediction: The excitement around the hire of Montgomery is justified and the program appears to be in good hands from a coach that won’t take this opportunity for granted. Tulsa has gone south as a program since their CUSA championship in 2012 and there’s still a lot of rebuilding left before this squad will compete for an AAC title. The defense is likely to continue to struggle, but expect an increase in production from the offense. Getting to bowl eligibility is likely out of reach, but a definite goal for this squad.