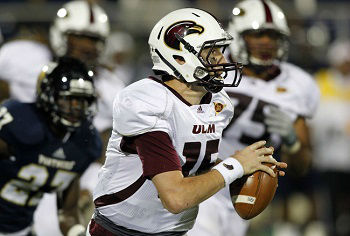 Preview: After getting off to a respectable 3-1 start to their 2014 season, the Warhawks fell apart down the stretch winning just 1 of their final 8 games to finish 4-8 overall. Head coach Todd Berry has had mixed success in his 5 years as the head man leading ULM to a 27-34 record. With a veteran defense that returns 8 starters the team is hoping to build off of this unit and their 13 game schedule to get back to bowl eligibility.

ULM struggled to get their run game going all last season and they often had to abandon the run all together to try and move the chains. The offense is hoping to revamp itself this season with Berry taking over the play-calling role, but this unit is far from a polished group with only 5 returning starters. The team is searching for a starting QB and they’ll likely pick between the veteran Brown and the underclassman Smith who has more upside. The O-line was a weakness last season and the unit still isn’t expected to be great with 3 starters back. If the O-line continues to struggle don’t expect backs Watson and McNeal to have great campaigns. Whoever wins the starting QB job will have solid targets to throw to with Holley and Ceaser.

The defense should continue to progress with nearly all of the top returning tacklers from 2014 back in the fold. ULM had their moments on the defensive end throughout 2014 and a lot of pressure will be put on this group again in 2015. The D-line returns 2 starters and this unit will be around Gerrand Johnson who was a tackling machine last season. The LB corps is one of the better units in the conference led by the likes of Kissinger and Johnson. The secondary returns 3 starters and this unit will be led by all-conference player Mitch Lane. The backend of the defense is the strength of this team and that’s important in the 3-3-5 scheme.

Prediction: Getting to 6 wins and bowl eligibility will be aided by the fact that ULM will be playing a 13 game schedule in 2015. The Warhawks have to be hoping that brutally tough early season matchups on the road against Georgia and Alabama won’t hurt the psyche or health status of the players. If the Warhawks can show slight gains on the offensive side of the ball this squad should be able to turn some of their close losses in 2014 into wins in 2015. Reaching bowl eligibility has to be the first goal set for this squad.