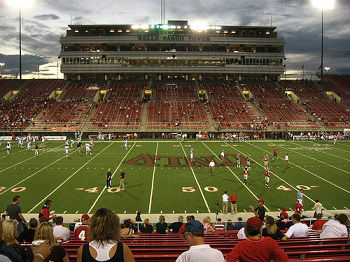 Preview: The UNLV football program is looking for a shot in the arm and the team is hoping they get that with new head coach Tony Sanchez. It’s uncommon for high school coach to get a head coaching gig right away at the college level and the Rebels are taking a big gamble by brining Sanchez aboard. It can’t get much worse at least for UNLV as the team is coming off yet another double digit losing season going 2-11 overall, following a surprise bowl appearance in 2013.

UNLV will put more of an emphasis on the run this season given their new head coach is well known for pounding the ball on the ground. The Rebels are looking for a more physical approach to improve on an offense that ranked near the bottom of the FBS in scoring last season. The starting QB job is Blake Decker’s to lose, but the veteran has been pushed by JUCO transfer Kurt Palandech. The Rebels lose some might on the O-line, but this unit returns 3 starters and has some intriguing new guys coming in to produce. The run game will be look to be developed by returning starter Keith Whitely along with newcomers Campbell and Thomas. The area of strength for this unit comes at receiver with guys like Boyd and Keys coming back.

The defense was tough to watch at times in 2014 and the unit will look to be remade under new DC Kent Baer who comes over from Colorado. UNLV couldn’t consistently stop the run in 2014 and that’s where this team needs to improve right out of the gate. The D-line returns just 1 starter and the development of this young group is vital to the defense’s success. The LB corps is the clear strength of the defense with all 3 starters back including Lotulelei who was a tackling machine last season. The secondary returns just 1 starter and this is another group that’s hoping some new faces can contribute right away. The secondary is led by safety Peni Vea and he’ll get help from highly touted JUCO transfer Jay’Onn Myles.

Prediction: The community is excited about the new head coach given Sanchez has ties from his time as a high school head coach in the area. Even with the overwhelming support of the fan base the team still has a long way to go before they can even think about reaching a bowl game. With a brutally tough opening schedule with games against Norhtern Illinois, UCLA, and Michigan it’s going to be a tough start for Sanchez. Avoiding double digit losses should be the short term goal for this program.